After an absence of a couple of years, I am once again back in Chicago. Chicago is definitely one of the world’s special cities. Spending a few days in the city, I keep track off the current local agenda. Dick Cheney’s memoir “In My Time” has just come out. He makes explicit his personal and political memories while he was the vice president in the G.W. Bush administration. Cheney claims that he is optimistic about the book sales. Meanwhile Colin Powell meets with press claiming that in Dick Cheney’s memoir, he and some other colleagues are not portrayed correctly.

Hurricane Irene poses the threat of severe damage to the west coast of the country. Thousands of houses have been without electricity for many days. Roads, highways, houses and shops have been damaged heavily. Initial damage estimates in the United States are at seven billion dollars. The most widely asked question is how President Obama will cover the cost of Irene. 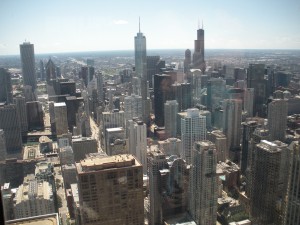 Dr Mehmet Oz is either on the cover of magazines or he is being interviewed by the press. He is a prominent authority in personal health and nutrition. Dr Oz is even giving recipes from Turkish cuisine such as menemen. Together with my husband we think about Prof Arman Kirim whom we lost recently in Istanbul. Besides his academic career as an economist, he had been the author of several best-selling cooking books in Turkey. Similarly, a Turkish cuisine based cooking book by Dr Oz could be an excellent guide for thousands of Americans who are fighting obesity and the complications it causes.

Chain book stores are losing out against online book sales. It makes me think that in a five-year- time it is a possibility that e-book stores may take over completely. Borders announced its bankruptcy and its nationwide shops will be closed down by the end of September. When we go to the Borders on State Street, we see that it is no longer the Borders in which we have spent so much time. It rather looks like an open market, even the shelves are on sale. Thank God, Barnes & Noble is still here, where would we have our day long coffee & book treat. 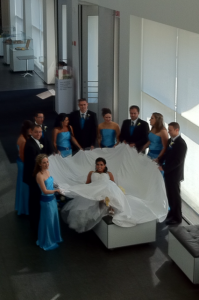 Wedding photo shoot of a couple in the Contemporary Art Museum

At night, I zap the American TV channels. Oprah’s old shows are still on air. I come across a show in which she is hosting Shaun Cassidy. Shaun Cassidy, who was a pop idol in the 1970’s, gave up his music career after a while and twenty years ago set out on a career as a producer. I recall that the first popular song I learnt in English was “I like Chopin” when I was in the fourth grade. This means that Shaun Cassidy years was too early for me. Oprah invites the fan who bought the first ticket for Shaun Cassidy’s concert in New York. She was a teenager then, now a middle aged black woman. Shaun Cassidy asks her how much she paid for the ticket. The ticket cost 8.5 dollars. She tells the audience how hard she worked to buy the ticket by baby-sitting and working as a cleaner in people’s houses. Then Oprah invites the fan to the front row to sing along with Shaun just as she had done all those years ago. Shaun, the fan, Oprah and all other people in the studio are feeling such intense emotions.  All together while the crowd is singing away, I think to myself about why Oprah Winfrey is such a great talk-show host. She has a big heart and touches everyone.

All my senses are alert trying to keep up with what is going on here in Chicago while getting through that long to-do list before I make way back to Istanbul. 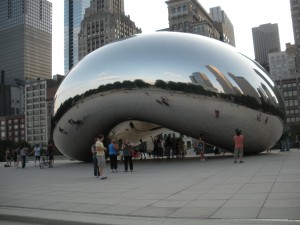 Kapoor Sculpture in the Millenium Park 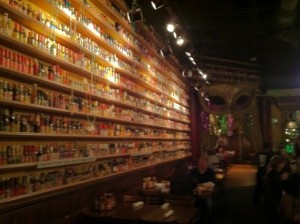 Variety of sauces exhibited in a Louisiana cooking restaurant